The Central Market in Valencia: a treassure in the city center

The Central Market is a treassure, it is tradition in the city center where to spent 1h buying or enjoying the enviroment. In our private guided tour in Valencia we invite you to visit this emblematic place.

This grand Modernist building was designed in 1914, although not inaugurated until 1928. It was designed by Francesc Guàrdia and Alexandre Soler March, both students from the Architects School in Barcelona. Due to their studies we can see modernist influences and geometrical lines from Cataluña.

It has always been known for the quality, variety and freshness of its products as well as the helpful, personalised service provided by its traders.

The Mercat Central de Valencia or Central Market covers exactly 8,160 square metres divided into two areas or zones. The first one is an irregular shape with a surface area of 6,760 square metres and the other, which is octagonal and covers 1,400 square metres, houses the fish market. The basement, which has 7,690 square metres, was previously a fish auction and is now used as a car park.

It is generally considered one of the oldest European markets still running.

Accompanied by our official and licensed tour guide in our private guided tour, we recommend you to follow its indicatios and get lost in its corridors, admire the colors of fruit, feel the voices of people talking and laughing; perceive odors of roasted pumpkin, oranges, celery and artichokes; furnaces of herbs and spices, which are given to the Valencian cuisine, spices already in Valencia received from East.

In 2004 was rehabilitated. This project consisted of a complete renovation of the building, and an update of the commercial function as a market and its facilities.

Buying in this place is loaded with great charm, the beauty of its architecture and the tradition and history of the market. 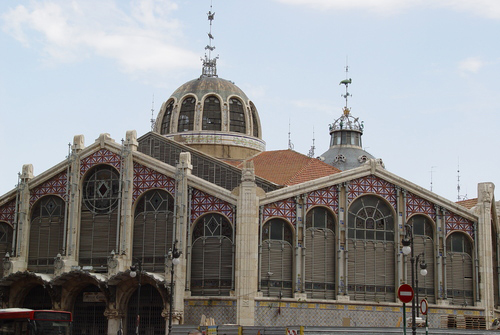