Discover this unique activity Paella show cooking Valencia!! Learn from a local chef and practice how to cook a real Paella, following a local recipe in the popular city of Valencia.

Paella  is a Valencian rice dish that originated in its modern form in the mid-19th century near lake Albufera, a lagoon in Valencia, on the east coast of Spain.

Now you have the chance to learn and discover the secret of this dish in our Paella show cooking Valencia. 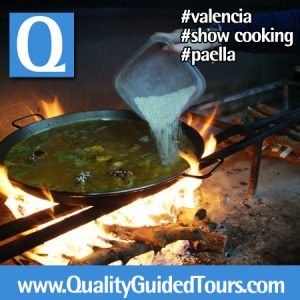 Some of the ingredients needed for cooking a real Paella Show cooking are: