Cathedral of Murcia, created in 1394 on the site of a former mosque.

It was the bishop Fernando de Pedrosa who placed the cornerstone. The interior is Gothic.  It is made up of three naves with an apse and twenty-three chapels. The chapels are dedicated to the patron saints of the labor unions and to the burials of the bishops and nobles that fomented or collaborated with the construction of the cathedral.

The façade, of this Cathedral of Murcia, is Baroque and was built according to design by Jaime Bort. It has a 95-metre tower that took more than two hundred years to build with the involvement of many different architects, of whom Ventura Rodríguez stands out especially. Los Vélez Chapel is Flamboyant Gothic and has a vaulted ceiling with star-shaped skylights, while Los Junterones Chapel is in Renaissance style.

The bell tower, built between 1521 and 1791, stands 90 metres tall—95 metres  with the weathervane. Is the tallest campanile in Spain. It ascends in five stages of different widths. The tower also combines a melange of styles. 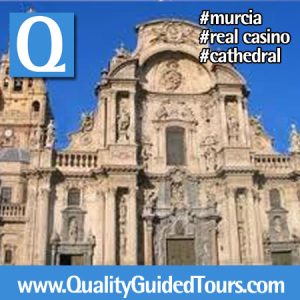