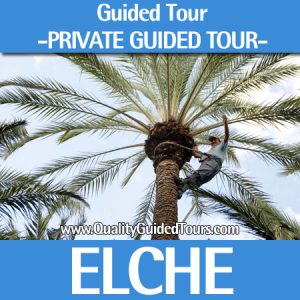 The Elche “Palm tree groove”  is the largest palm grove in Europe. It was declared a World Heritage site by the UNESCO for its role as a testament to its role in the transmission of culture from East to West, and for the survival of an exceptional watering system inherited from the culture of Al-Andalus.

The urban area of Elche “Palm tree groove”, declared a World Heritage Site, surrounds the city. On one end is the Town Park, the largest gardened area of the palm tree forest, which has a total of 200,000 specimens. The Royal Mill, the Park Museum and the Rotonda (an open-air theatre) are found here. The old mill and granary, of Arab origin, house the local Palm Plaiting workshop. In it, the palms to be carried in the Palm Sunday processions—a festivity that has been declared of International Tourist Interest—are crafted in a traditional manner.Huerto del Cura (the Priest’s Orchard), declared a National Historic Garden, has palm trees from all over the world, arranged in a peculiar manner, following Arab, Mediterranean and local influences. In this area, where it is also possible to admire great examples of traditional architecture, the Imperial Palm Tree stands out. This is an impressive 150-year-old specimen with eight branches. The traditional Elche “Palm tree groove”, divided into numerous orchards, can be visited on foot or by bicycle. 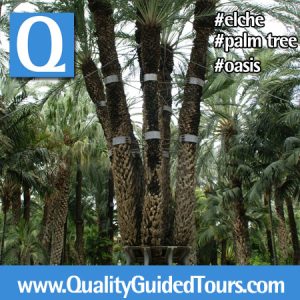 Open throughout the year (except the 25th December)