Guadalest village, on top of a five-hundred-metre-high rock, overlooks the reservoir that supplies water to the region of Marina Baixa. It´s a very special village surrounded by thousands of loquats and a very interesting history evolving the Castle.

Guadalest village is first known for its ‘castle’, which is literally hanging on he cliff where it is found. There are also numerous museums, one even more interesting than the other mainly because they are the typical museums of art or history but about curiosities in life.

It is a good idea to go up to the castle of San José, a Muslim fortress from the 11th century, which can be accessed through a natural tunnel on the rock. From this fortress the visitor will have splendid views of the surroundings. From the 11th-century castle of La Alcozaina, the only structure that remains is a tower.

We offer different chances to get a tour to Guadalest village and be accompanied by a local guide that will explain you all the curiosities, histories and legends around Guadalest village.
You will find many shops selling souvenirs, crafts and local produce such as honey, wine, handbags etc.

Guadalest village one of the most popular tourist attractions on the Costa Blanca!! 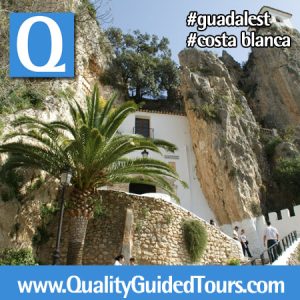