First century A.D, together with the theatre in Mérida, is one of the most important Roman Teather in Spain, we talk about the Roman Theater in Cartagena.

In our private guided tour in Cartagena which includes The Roman Theatre of Cartagena you will discover the important role that the town of Cartagena played in the history of Old Spain (Hispania Antigua).

Choose a private tour guided in Cartagena to swim thrue the history about the discovery of the Roman Theatre is large and complex but the 6 February 1990 marked a milestone in the history of archaeological research into the Romanisation of the southeast Iberian Peninsula, when the structures found at the site were identified as the ruins of a Roman theatre.

This site has remained hidden for centuries because of it’s location in an area of the city uninterruptedly inhabited. For this reason its original features remained hidden with the passage of time. An example of this inhabitation was the partial superimposition of the Old Cathedral on the top part of the Roman Theatre, one of the major singularities of this archaeological collection.

Nowadays, we can enjoy a spectacular Roman theatre with the cavea with a capacity of 7,000 spectators, had a maximum diameter of 87m, was split into three areas, or maeniana, divided vertically by five sets of steps in the ima (lower stands) and nine sets of steps in the media and summa cavea (middle and upper stands). Part for the orchestra, scaenae frons or stage façade and the porticus post scaenam, rose in terraces culminating in a double porticoed gallery surrounding a central garden.

Accompanied by a local and licensed tour guide, we invite you to discover the Roman History and other cultures. Its proximity to some of the more emblematic buildings such as the Cathedral, the City Council Palace, the medieval Conception Castle and the port facilities, makes it one of the most attractive places and monuments of Cartagena. 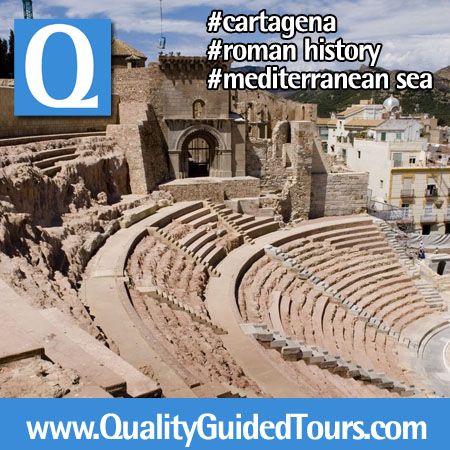