The best season is coming, and in Alicante we have a special festivity to celebrate that summer has just arrived. Fogueres Festival Museum in Alicante is alraedy!

We talk about “Fogueres” (Bonfires of Saint John) and we offer a private guided tour to Alicante where you can visit this spectacular museum.

The origins of this festivity are by burning old pieces of furniture on the night of Saint John on June 24. The Bonfires festival in Alicante was originated in 1928.

The most important in this festivity are the huge bonfire sculptures. They are made of wood, cardboard, mud, paintings and, nowadays, of cork and polyurethane too. A Bonfire is not only an artistic creation, it is a critique of the societal, political and economical situation of the world in general and the city of Alicante especially. Critiques are made across the “Ninot” or figure. The Ninot usually represents a famous person, often an amusing parody of a politician.

At this point we have a controversial matter, people can think “Fogueres” are the same as “Fallas”, but we should specify that When Bonfires were originated in Alicante there were not made by “fallero” artists, and the first Bonfires were made by local painters and sculptors. They did not imitate the Valencian style; they were very vanguardist and they followed Art-Dèco and other artistic currents. 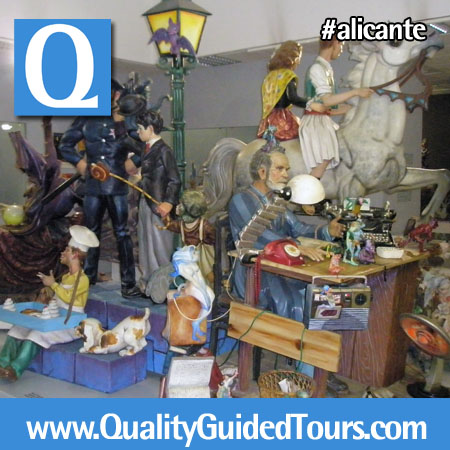 Visiting the Fogueres Festival Museum in Alicante you will have a general idea about this spectacular festivity.

This museum explores the evolution of Alicante’s most representative festival, the “Hogueras de San Juan” bonfire has been officially declared as of Interest to International Tourism.

In five halls you will understand the general meaning fo this festivity. The 1st hall describes the begining of the Bonfires: the origins since 1936 when the Spanish Civil War started. The 2nd hall describes the period when the Bonfires were developed. In the 3rd hall you will discover a special period of time when de democracy arrived to Spain and the last hall is where you will watch a video some traditional clothes and the description of the other events that are held in June around Saint John.

Fire, light, jokes and a great enviroment are the clues for this special festivity the “Bonfires os Saint John”.