Altea is a small fisherman village, know because of its wide dome covered with blue and white tiles, and a second one, crowned by a small cupola.

From this point on, numerous steep, cobbled streets, many of which have steps or are lined with small miradors and bowers, begin their descent towards the sea.

Typical whitewashed houses, which were formerly protected by a solid wall, mark the way. In Altea It is frequent to see artists’ workshops and studios in this traditional urban space, as well as craft shops. In the lower part of Altea we find the commercial street of King Jaime I, the fishermen quarter, and the port, an area marked by heavy fishing trade. We can also see the crowded promenade, and six kilometres worth of beaches with pebbles, small coves, and cliffs. 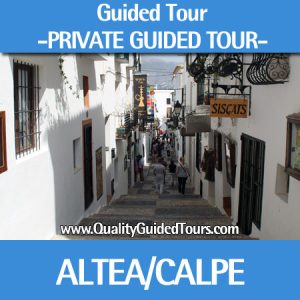