3 hours. From 10am to 13pm (recommended)
Heritage
Meeting point: Mare Nostrum restaurant at Cartagena´s harbor
Price per private tour from 1 to 35 people

Highlights
• Stroll the Modernist streets of Cartagena
• Enjoy panoramic views of the ruins of the Roman Theatre and Amphitheater of Carthago Nova
• Sample a typical tapa on Cartagena’s main Modernist street
• Enjoy a “must-see”: The Interpretation Center of Punic Walls.
• Go to La Concepción castle

Enjoy this Cartagena 3 hours private shore excursions walking tour with your own, couple, family or private group from 1 to 35 people

Visit the main sights of Cartagena in this Cartagena 3 hours private shore excursions walking tour in the historic center, including panoramic views of the Roman Theatre of Carthago Nova from La Concepción castle. Book our private tour guides in Cartagena.

Accompanied by your private tour guide in Cartagena discover more than 23th centuries of history. In 1728 Cartagena became the capital of the Spanish Navy’s Maritime Department of the Mediterranean and the city was heavily fortified with the construction of the castle on the site of a former Moorish kasbah.

Start this tour of Cartagena 3 hours private shore excursions walking tour visiting with your private tour guide in Cartagena the Interpretation Center of Punic Walls (from III b.C), that´s a “must-see” site in Cartagena, the very begining of the Carthagenian culture in the Mediterranean sea.

After that we will take the panoramic elevator for the castle (outside visit) known as “La Concepcion”, and marvel at the panoramic views of the Royal Marine, the quayside, and the Modernist city center of Cartagena. From this point of view we your private tour guide in Cartagena will show you where is the Roman Theater and also the Roman Amphitheater from the old Cartago Nova City. 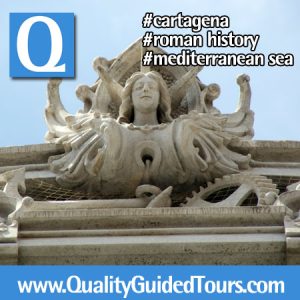 Along the Calle Mayor you’ll get a general idea about the economic boom of the 19th century. The Town Hall, for example, is a triangular-shaped building featuring 3 different façades. The Cervantes House boasts a façade featuring the white belvederes that are typical of Cartagena. You’ll also see in this Cartagena Spain 3 hours private shore excursions, the Grand Hotel, which was built in the style of the Viennese and French Modernist schools. The hotel’s 2 façades are joined by a rotunda crowned by a spectacular dome.

Not included in this Cartagena 3 hours private walking tour:

CHECK THE PLACES YOU WILL VISIT IN THIS CARTAGENA 3 HOURS PRIVATE SHORE EXCURSIONS WALKING TOUR:

** Private walking tours developed by Qualified Local Guides. Book only professional private tour guides. If you are travelling with a private group, family or friends, you can book a private guided tour + transport for your party